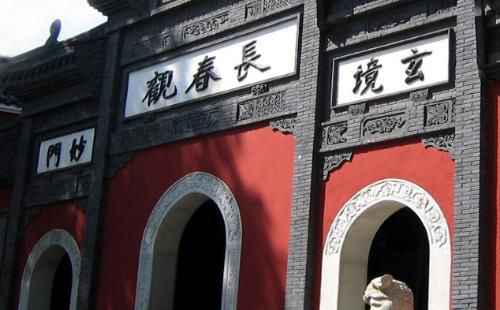 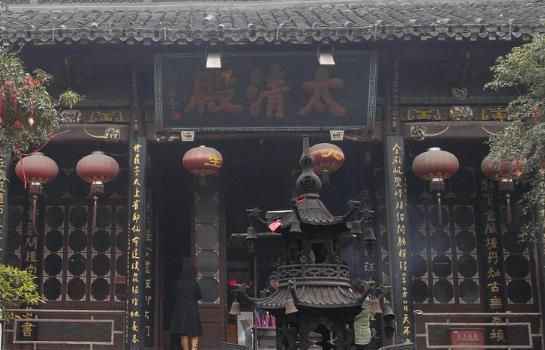 Instructions of the Palaces in Chang Chun Taoist Temple

As the main entrance to Chang Chun Taoist Temple, Ling Guan Palace faces south with red-colored walls, dark tiles and three doors. The architectural style of the Palace is Pai-loo, a typical Chinese traditional decorative archway. A statue for Wang Ling Guan was built in the center of the Palace, with Qing Long, Bai Hu, Zhu Que and Xuan Wu, the four Dharmaraksa (marshal in Taoism) besides it. Wang Ling Guan, serving as a guard for protecting the Taoist laws, does disciplinary investigations among both heaven and ordinary mortals and leads millions of heavenly soldiers to defeat the evil. So he acquired his name as “the most gifted and brilliant god of judicature” by the Jade Emperor (the supreme deity of Taoism). As the Chinese saying goes that “Inspect the world with his three eyes, and shock the mortal with a spur.”

The angled palace lies against the mountain, with a precious vase on the ridge of its double-eave roof and colored pattern on the carved-beams. Lord Lao Tzu of the Great Monad is enshrined in the center of the palace, with Wen Shi (an official of keeping the gateway of the city in ancient China) on his left and Zhuang Zi on his right. Taoism is a natural theory including the inner-laws of everything in the universe, no mater how huge or tiny it is. Scholars of the past called it the theory of Lord Lao Tzu, and it has also been called Lao Yi with another Taoist classic Yi Jing (the Book of Change) together. The work of Lao Tzu, Tao Te Ching which includes the inner-laws of everything in the universe, is a beacon for later generations forever. Lord Lao Tzuof the Great Monad had many other holy titles, such as Tai Shang Lao Zu, Wu Ji Lao Zu, San Qing Lao Zu and Dao De Tian Zun, etc. People call Lao Tzu and Zhuang Tzu as “Lao Zhuang” while Lao Tzu and Huangdi as “Huang Lao”. The doctrines and theory of Lao Tzu have laid a foundation for Taoism. 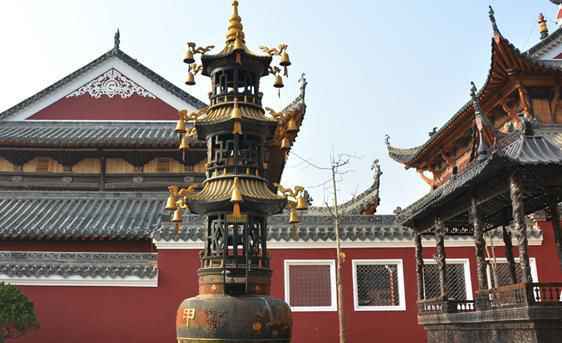 The palace is also called Jia-zi Palace. The statue of Dou Mu, the mother of the Plow, is enshrined in the center of the palace with sixty Jia-zi Gods around it. In Chinese lunar calendar, sixty years compose a cycle and each year of the cycle has its own earth god, or Jia-zi God. Dou Mu is a primary goddess, with four hands and eight arms and an expression of an earliest ancestor in Taoism, holding the sun and the moon in her hands. The basic theory in Taoism is that Chaos bears order, order bears Yin and Yang (Yin is feminine, negative principle, while Yang is masculine and positive); Yin and Yang, the two opposing principles in nature make up the theory used to explain all natural phenomena. Dou Mu has served the Jade Emperor for long as well as the Nine Stars in the heaven. Dou Mu controls the sun and the moon to harmonize Yin and Yang, holds Hu Shi (a holy tool )to meet pressing needs and smooth away the disasters in the world of mortals, and benefit the alive and release souls of the dead from purgatory (by ringing the holy bell). The mortal in the world are blessed with safe and longevity by her. Generally speaking, Dao Mu charges birth, death, disaster and bliss, which demonstrates the essence of Taoism, so she is a main god of Taoism. There was also an incarnation of her in ancient India, thus she has another name “Mili Putian Saint” (god of saving and benefiting ordinary mortals). And the sixty Jia-zi Gods are the specific protective gods of the mortal.

The statue of Lu Dongbin, one of the Eight Immortals in Taoism, is enshrined in the center of the palace. As the legend went that, Lu Dongbin encountered Han Zhongli who was also one of the Eight Immortals and later became Lu’s master. After carousing together, Lu had a fond dream and felt enlightened when woke up. And then he decided to abandon his home and followed Han to enter into Taoism and began to make full - time effort to cultivate his spiritual and religious life in Zhongnan Mountain. Hereafter Lu chronologically became apprentice of Fire Dragon God to learn the swordsmanship of dodging in the sky and of Ku Zhu to master the arts of joining the sun and the moon. Later on, he got the chance to go to the court to serve the Jade Emperor. Going through all the vicissitudes of life, Lu has never changed his great ambitions. Taoist temples as a sign of memorizing Lu Dongbin can be seen everywhere in the world of mortals. The first emperor of Yuan Dynasty in Chinese history entitled him “the Immortal of Justness and Enlightenment”. The seventh emperor of Yuan Dynasty also gave him the title of “the Immortal of Reliance and Protection”. Lu then propagated Taoist doctrines to Wang Chongyang (the master of the Seven Best Disciples of Quan Zhen School ) and the Seven Disciples of Quan Zhen School. So they called Lu “Forefather in the North”.

With a Chinese tower style, the palace is the climax of Chang Chun Taoist Temple. The first ancestors of China’s culture, Fu Xi, Shen Nong and Xuan Yuan are enshrined here, with the Gods of Wealth on the left and Goddess of Mercy on the right. There is a Chinese-style pavilion upstairs where the Jade Emperor is enshrined.

The Lord of Fu Xi has observed the laws of all the creatures in nature and thus picturing Eight Trigrams (a set of symbolic signs created in ancient China) for keeping a record of events and practicing divination. The Lord of Shen Nong, otherwise known as Yandi(the God of Fire), has planted food crops and tasted hundreds of herbs used in traditional Chinese medicine. He has also made coverings by fell and bone-made needles. Thereafter, Shen Nong, being one of the first ancestors of the culture of China, was also the earliest ancient physician as well as the father of agriculture in Chinese history. Xuan Yuan, also called Huangdi, was the first emperor in Chinese history. He has studied and speculated the calendar as a system, spread the early Chinese characters and calendar as well as stared Chinese medical science. The Huangdi’s Classic of InternalMedicine is the earliest documentary laying a foundation for Chinese medical science.

The Queen Mother, enshrined in the center of the palace, is also called “Gold Mother”. As the goddess who has enjoyed the highest honor in heavenly court, she stands for the essence of Yin, feminine and negative principle, in the west. So she got the name “the Queen Mother of the West”. The Queen Mother is in charge of etiquette and feast of gods in the heaven while of matrimony and child-bearing in the world of mortals. When Huangdi battled with Chi You (the leader of a group of rebels), the Queen Mother conferred several key skills to Huangdi which helped him succeed to a large extent. The Queen Mother has a respectful form of address in Taoism that “the Mother of Goddesses”. There are statues of Jiutian Xuannv (Empyrean Goddess) and Dimu Yuanjun (Goddess of the Land) respectively standing on her two sides in the palace.